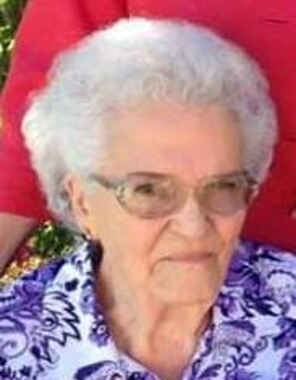 Back to Sammy's story

Memorial graveside services for Sammy Lou (Smith) Hudson, 92, of Ada are at 11 a.m. Saturday, Dec. 14, at Rosedale Cemetery, Pastor Chad Large will officiate.
Mrs. Hudson passed away Monday, Dec. 2, 2019, at a local nursing home.
She was born Dec 9, 1926, in Muskogee to Samuel Brown and Neomah Eddings Smith. She was a longtime resident of Ada.
She married the love of her life, Wesley Coy Hudson, in 1943 at Coalgate. He preceded her in death May 31, 1994.
Sammy worked for IGA as a butcher in her early years. When she and her family moved to Coalgate, she worked many years for Blue Bell (Wrangler). She was a seamstress/inspector for Micheal Casuals in Konawa. Then she worked and retired from K-Mart in Ada.
Sammy was a member of Crosspointe Church, formerly called Evangelistic Temple, for 57 years.
She loved her family very much. But most importantly, she loved her Jesus. She spoke often of when she got to heaven, she wanted to see Jesus first, then the love of her life, Coy.
Survivors include a daughter, Laura Griffin of Ada; son, John Hudson and wife, Karen, of Ada; son, Gilbert Hudson and wife, Kathy, of Seminole; daughter, Sandra Bates and husband, Ronny, of Ada; 10 grandchildren; 28 great-grandchildren; eight great-great-grandchildren; and two sisters, Janet Pound of Moore and Joan Pendergrass and husband, Bill, of Moore.
She was preceded in death by her parents, her husband, a grandson and a sister.
Published on December 6, 2019
To plant a tree in memory of Sammy Lou Hudson, please visit Tribute Store.

Plant a tree in memory
of Sammy

A place to share condolences and memories.
The guestbook expires on March 05, 2020.