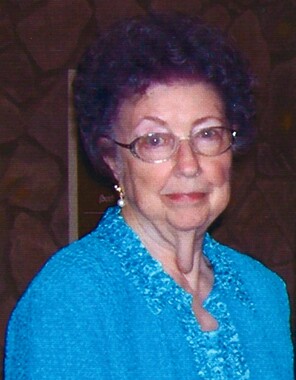 Nelda Nadine (Musgrave) Ferrero passed away July 9, 2019, at the age of 90 years in Coalgate.
She was born Feb. 7, 1929, in Coal County to Walter Calvin and Anna Louise (Hazel) Musgrave.
Nelda was born and raised in rural communities north of Coalgate and Cottonwood. She married James Charles Ferrero on Sept. 16, 1950. He preceded her in death Jan. 11, 2004.
She was a lifelong member of the Coalgate Church of Christ, where she served as a Sunday school teacher and Vacation Bible School teacher. She and her husband, James, were instrumental in securing the funds for the construction of the building where the Coalgate Church of Christ members worship today.
Nelda was a wife, mother and homemaker. She was a Home Room mother for both children and also served as president of the group.
Nelda was a active member of the Bethel Extension Club and later, a charter member of the After Five Extension Club. While a member of the Bethel Extension Club, she served as president while the group and other clubs took great pride in raising money to pay for the kitchen of the Homemakers at the County Barn. She was a member of the After Five Homemakers Club until 2017.
Nelda enjoyed collecting dishes, cooking and baking as well as crocheting and won many awards for each.
She was survived by her children: a daughter, Lynne Ferrero White, Norman, a son, Mark Ferrero and wife, Melinda, Kingwood, Texas; grandchildren Tyler White and Christen, Fort Worth, Texas, Sara White Blair and Kyle, Moore, Paden Ferrero and Cally, Lubbock, Texas, and Dakota Ferrero and Brittany, Kingwood; great-grandchildren Georgiana White, Carson Blair, William Blair, Jack Ferrero; sister-in-law, Pat Ferrero, Coalgate; nieces and nephews, Gina Ferrero McNutt and Scotty, Taylor and Madelyn, Coalgate, and Michael Ferrero and Michele, Micah and Michaela, Hamlin, Texas; cousin, Betty Musgrave White, Sulphur; and special friends Phillip and Kay Helms, After Five Homemakers.
Nelda was preceded in death by her parents, Walter and Anna Musgrave, and her husband, James C. Ferrero.
Funeral service will be at 2 p.m. Friday at Coalgate Church of Christ, with Charles Collette officiating. Interment will follow at the Coalgate Cemetery.
Family Night will be from 6 to 8 p.m. today.
Published on July 11, 2019
To plant a tree in memory of Nelda Nadine Ferrero, please visit Tribute Store.

Plant a tree in memory
of Nelda

A place to share condolences and memories.
The guestbook expires on October 09, 2019.

Restore the guestbook to view the 2 more posts by family and friends, and share a memory or message of condolence of your own.