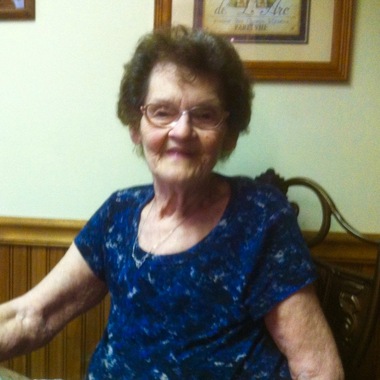 Back to Naomi's story

Naomi Ruth Hardin of Stratford was born May 23, 1931, in Howland, Texas, to Theodore Thomas Smith and Lelo (Tidwell) Smith.
She passed away Jan. 20, 2020, in Wolf Living Center, Harrah, at the age of 88 years, 7 months and 27 days.
She grew up in the Wanette area, where she played basketball and graduated from Wanette High School, then went on to attend OBU in Shawnee.
She married James Hardin on March 9, 1950, in Wanette. They spent time in Seattle and moved in 1966 to Stratford from Wanette, where she owned and operated a convenience store. She was a member of the Baptist faith.
Preceded by one daughter, Karen Ruth; three sisters; and one brother.
Survived by her husband, James Hardin of the home in Stratford; one daughter, Kristi Shipman and James Dockemeyer of Midwest City; two sons, Sam Hardin and wife, Vickie of Ada and James Neal Hardin of Lower Lake, California; eight grandchildren; and 15 great-grandchildren. Services: 2 p.m. Saturday at DeArman/Pickard Chapel, Stratford.
Published on January 22, 2020
To plant a tree in memory of Naomi Ruth Hardin, please visit Tribute Store.

Plant a tree in memory
of Naomi

A place to share condolences and memories.
The guestbook expires on April 21, 2020.