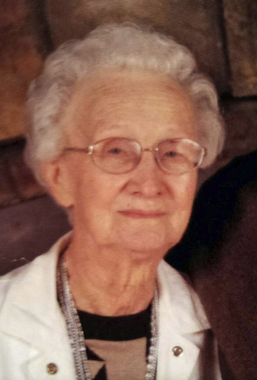 Longtime Konawa resident Imogene "Jean" Starns, 93, passed from this life Friday, Dec. 23, 2016, in Kingston. She was born March 23, 1923, in Konawa to parents William Albert Collins and Willie Leona (Greer) Collins.
She grew up on a farm east of Konawa. After high school, she worked for a short time in Ada with the U.S. Agricultural Department. World War II was starting, so she took the civil service test. After passing the test, she was sent to Washington, D.C., to work in the Pentagon as a clerk. After her father's health declined, she returned to Oklahoma. She worked with two of her sisters at McDonnell-Douglas in Tulsa as a "Rosie the Riveter," assembling airplanes.
She met and married William Frank Starns Nov. 12, 1946. They were married for 34 years until his passing Oct. 26, 1980. They moved many times over the years, employed with Sun Oil Co. They ended up back in Konawa in 1973.
She was a housewife who made every garage sale possible. Her number one priority was visiting with friends and neighbors. Jean never met a stranger and made informing others of things they didn't know her ambition in life. Jean was a member of the VFW and the American Legion.
She was preceded in death by her parents; her husband, William Frank Starns; her sons, Billy Gene and Michael Collins Starns; her twin sister, Geraldine "Jerry" Woods; and her sisters, Mildred Gasaway and Ruth Swigart.
Survivors include a sister, Dorothy Smith of Strother; a son, William Frank Starns Jr. and his wife, Jerri Kay, of Kingston; grandson, Nichlous Ryan Starns and his wife, Amy; a great-granddaughter, Isabella Caton Starns; and a great-grandson, Eathan Starns, all of Ada.
Funeral services are scheduled for 1 p.m. Tuesday at the Swearingen Funeral Home Chapel in Konawa. The Rev. Mitch Williams will officiate. Interment will follow in Konawa Cemetery.
Published on December 23, 2016
To plant a tree in memory of Imogene Starns, please visit Tribute Store.

Plant a tree in memory
of Imogene

A place to share condolences and memories.
The guestbook expires on March 23, 2017.

Restore the guestbook to view the 1 more posts by family and friends, and share a memory or message of condolence of your own.